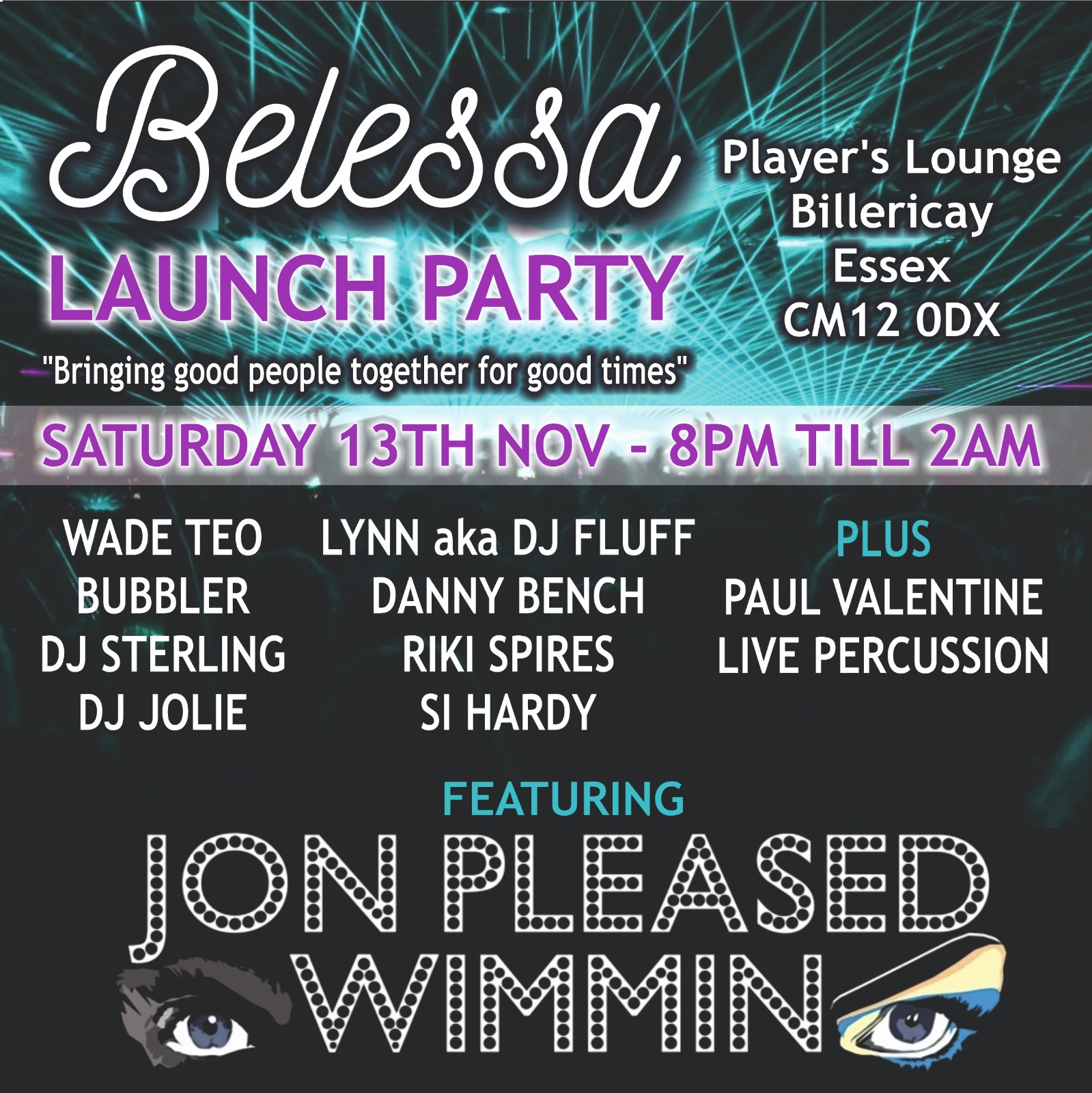 Belessa is the latest venture for friends Belinda Anderson and Vanessa Wrenn-Haye of Belessa Management & Promotions. Their main aim is about Bringing Good People Together for Good Times.

To bring their new club night brand to fruition, Belinda and Vanessa will have a strong selection of DJs, plus appearances by larger acts from across the UK and potentially Europe.

To kick off their launch party on 13 November 2021 they are delighted to announce that the global phenomenon Jon Pleased Wimmin will be joining them. Jon Pleased Wimmin rose to fame in the club world during the 1990s where his flamboyant cross dressing and his stylish presence became a force to be reckoned with.

Catch him doing what he does best where he will be playing alongside the renowned Wade Teo who is currently a successful Producer, DJ & A&R at Tropical Velvet Records, with a string of hit signings pushed to the label, in addition to his collaborations with Victor Simonelli who is one of the New Yorks finest and most prolific DJs and with Junior Boys Own and Faith Fanzines Terry Farley to form the group The Spaces Between.

Other renowned DJs on their launch night will include Centreforce 88.3 DAB Radio Presenters, Bubbler & DJ Sterling who have a huge following and who have performed at a whole host of events both in the UK and internationally. DJ Jolie of Funkysx 103.7 FM radio will also be joining in the line-up, as well as Lynn aka DJ Fluff who has travelled the world playing for celebrity A Listers; also playing alongside are Danny Bench former promoter of the Essex brand Lush, Riki Spires of Fantasy FM and Si Hardy from The Wisemen Collective. Not forgetting of course, live percussionist Paul Valentine who has performed alongside some of the biggest names in the industry, including Jamiroquai, Paul Trouble Anderson, Danny Rampling and Judge Jules.

Bringing the incredible laser show element to their events is Riki Spires who not only is a DJ, but also heads up his own company Laser Show Hire. Riki has vast experience in organising laser shows for clubs, private parties and major festivals all over the UK and Belinda and Vanessa are thrilled to have him board.

For their debut event, Belinda and Vanessa have chosen Players Lounge located in Billericay, Essex who are known as the Home of Performance. The modern interior of this fabulous venue lends itself to the occasion, with two rooms available for guest performers, as well as two bars together with professional mixologists creating a blend of extraordinary cocktails.

This really is an event not to be missed, it is all about having a night worth remembering.

Remember the Good Times, Don’t You Want Some More?